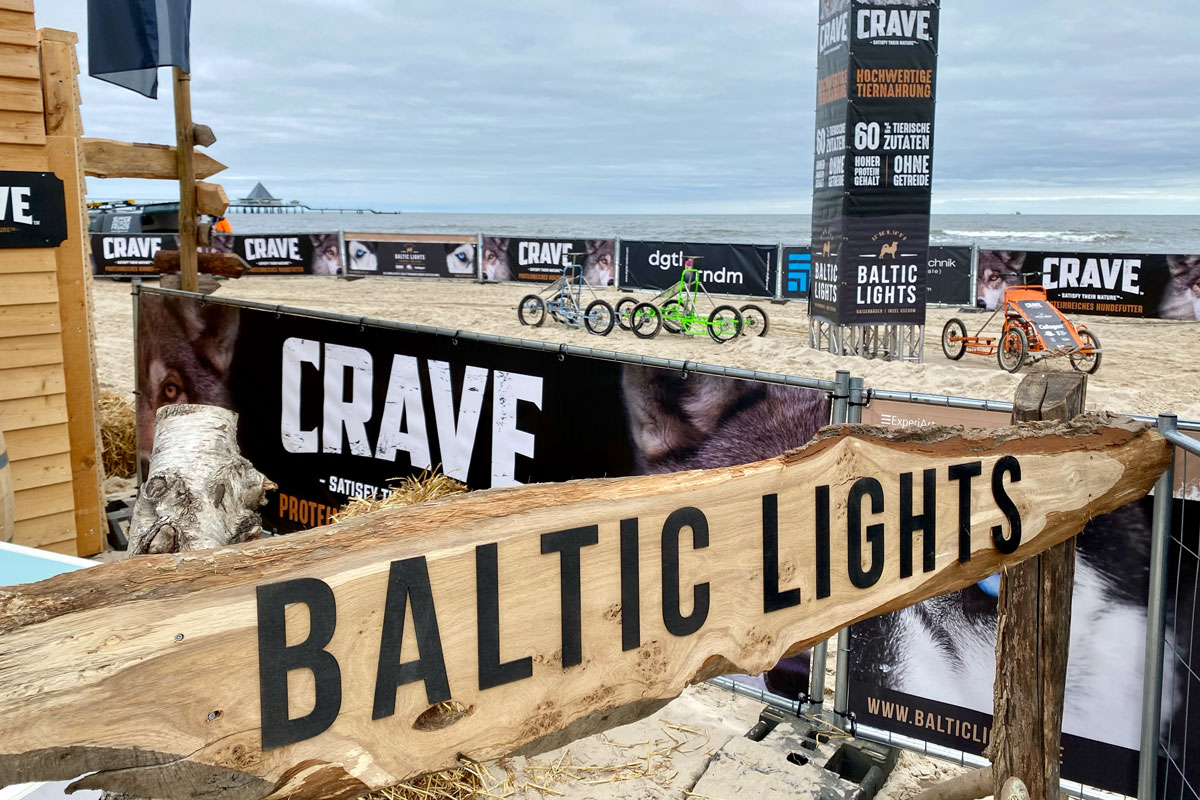 Lilly Ehlert has been training as a tourism clerk in the imperial baths since 2020. She is currently working in marketing and was our blog editor at the Baltic Lights event. Read her report here:

Finally it was time again - the northernmost sled dog race in Germany took place from April 04th to 06th after a two-year Corona break. March 2022 and I was there live. The charity event Baltic Lights was held for the fourth time this year in the imperial baths in aid of Welthungerhilfe. Celebrities, mushers and of course many onlookers traveled from all over Germany and even beyond to be able to take part in this special event on the beach of the island of Usedom.

On my way to the separated musher area I could hear the huskies from afar. Her dog singing was probably all Heringsdorf in the ears and the closer I got, the louder it got. As I stood in front of them, I could not only hear their excitement, I could see it. Hopping from left to right, the dogs couldn't wait to show their best performance for the next few days' races. Now and then I discovered a border collie among all the huskies, which seemed a bit out of place at first glance. But that's not the case at all, as most mushers use this breed as the lead dog, and so this dog has the most important role. Did you know that?

I slowly made my way to the beach so as not to miss the opening with a spectacular fire show. On the way I was able to watch the first training races, which made my anticipation for the next few days grow. Down on the beach there was a relaxed and easy-going atmosphere, helped by the band Boogie Rockets with their live music - a mixture of boogie-woogie, R'n'B and soul. People gathered around the many braziers to warm up in the freezing temperatures or enjoy the treats from the various food trucks.

At 19 p.m., Till Demtrøder officially opened the event with the words "A touch of Alaska on Usedom!" Despite appropriate clothing, I felt the cold build up inside me and found his statement pretty much correct. The live moderation was followed directly by the fire show with partly dramatic but also cheerful music. As the crowning highlight, the lettering “Baltic Lights” shone in fiery red in front of the lively, roaring Baltic Sea. With such an opening, the next few days could only get exciting and exciting. 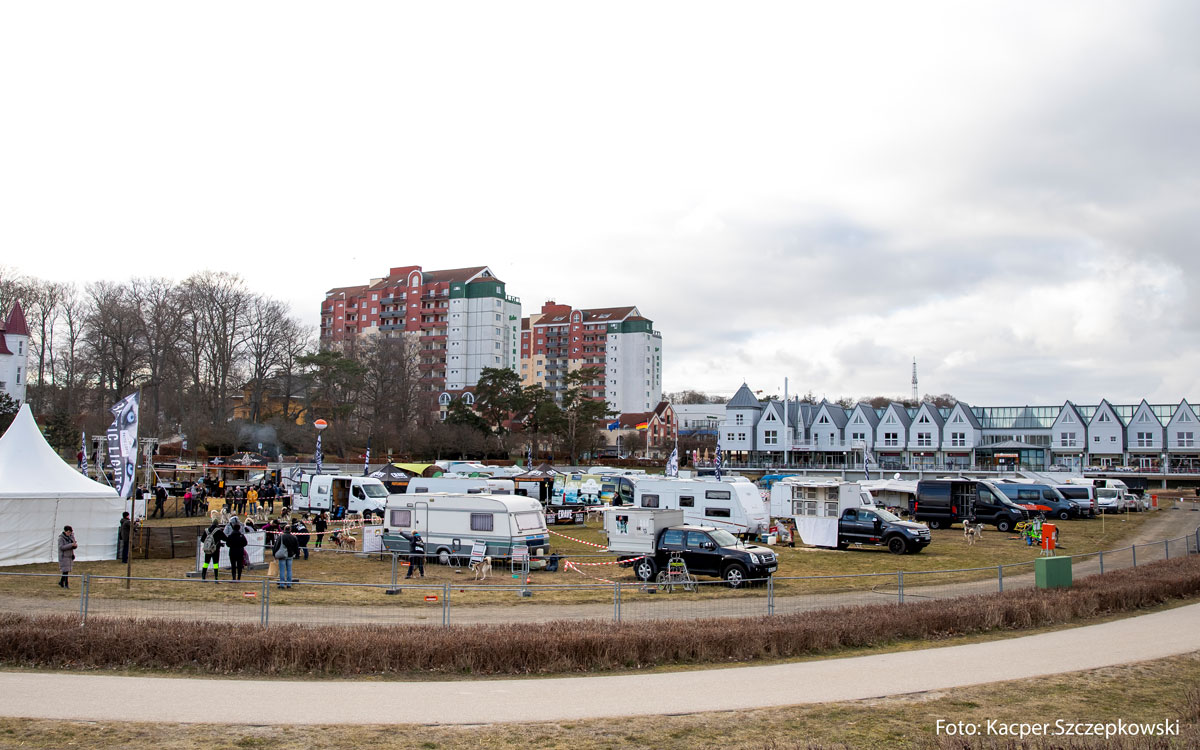 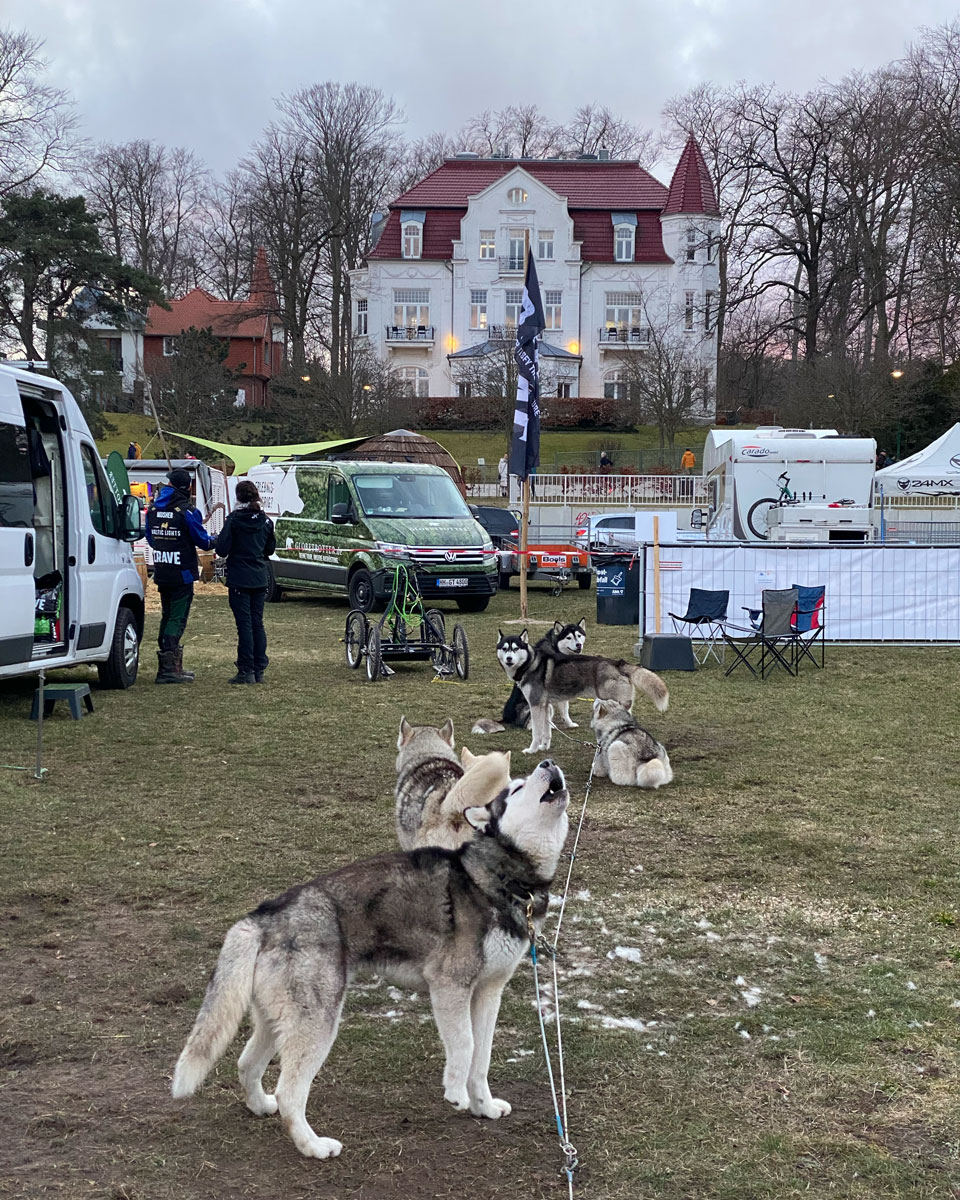 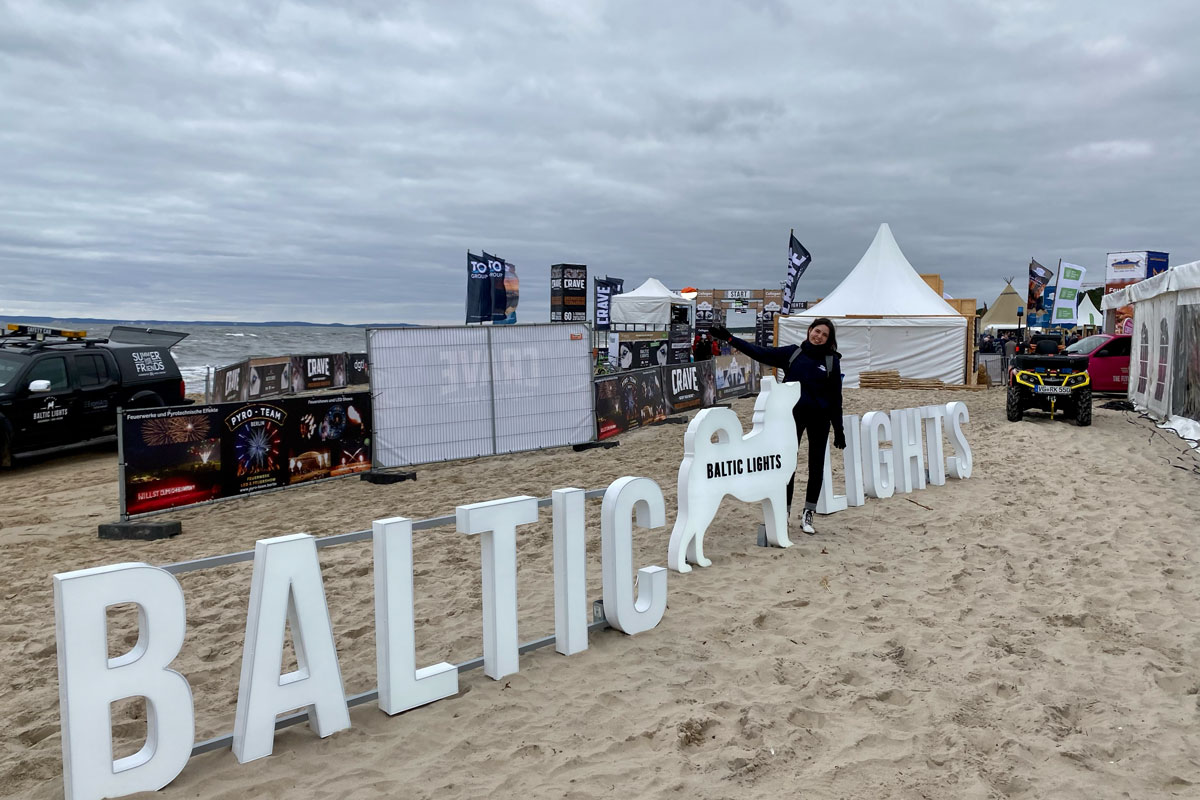 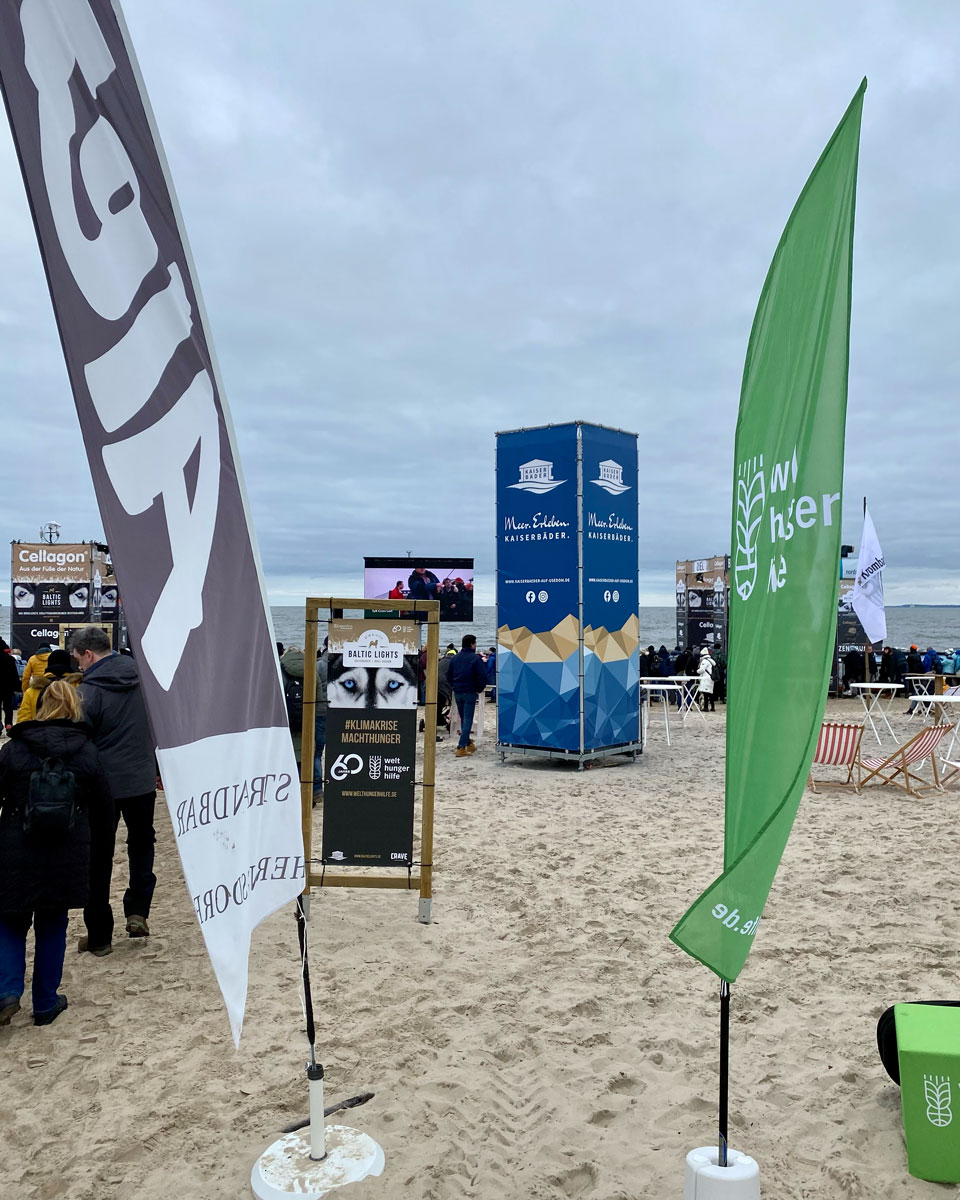 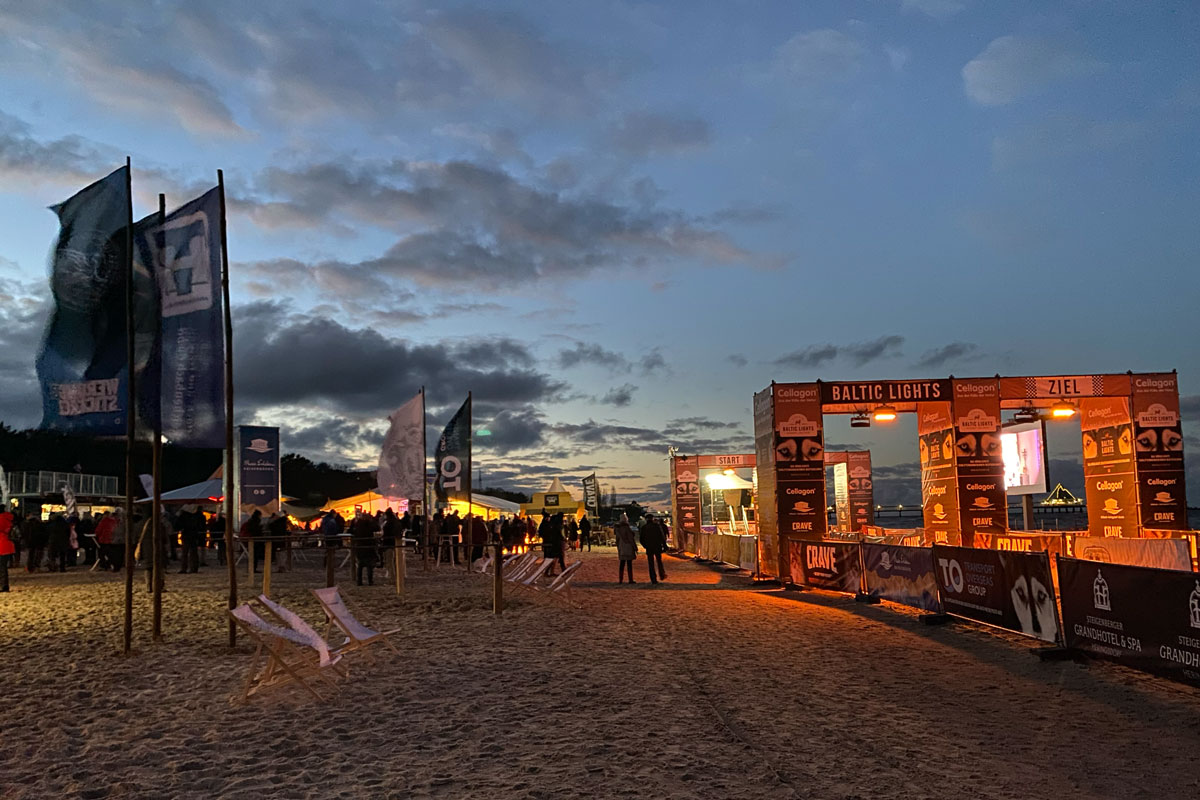 Today I started early so as not to miss the start of the first team. The event area was already well attended, but I was able to secure a nice place to watch the spectacle. Before the first race started, the track was compacted again with a roller. At least as good as it can be with the fine sand on the Baltic Sea coast. Meanwhile, the first musher of the day, André from Bavaria, could hardly hold back his six huskies. 3-2-1 and off we went! And they were back as quickly as they left, because the distance to Ahlbeck is only a few kilometers long. It's a no brainer compared to the distance the dogs normally travel, but don't underestimate the difficulty of the soft sand. But musher André found the route and the conditions to be perfect, as he said in an interview afterwards. In order to follow the team, I didn't have to look far into the distance, since the entire race was broadcast to the spectators with action cams and drones via an LED screen. And if you couldn't be there or couldn't get hold of one of the coveted tickets, which were limited to 1500 tickets, you had the opportunity this year for the first time to follow the entire event via live stream.

In general, not only professional mushers come to Baltic Lights with their sled dogs, I also met dog owners who came privately with their huskies, such as the animals Kaya and Sky from Osnabrück, who preferred to watch their conspecifics, pose with me and enjoy the cuddles.

When the races paused briefly, I wanted to go back to the musher area to get some more information about the teams. That's how I got into conversation with the "Bingiesser" team from near Munich. On their way to the imperial baths, they made a stopover in Leipzig, because driving the entire route in one go is a bit too far with ten dogs. The celebrity team around model Franziska Knuppe, who was born in Rostock, competed with the huskies of the Bingiessers. While I was talking to the team, the dogs howled loudly, because they had already discovered the training car and harness and were "very excited about the race", says Christian Bingiesser. The huskies had already warmed up by jumping back and forth, just like real athletes do before the competition. When the harnessing started, the excitement grew more and more, because "finally" it was the turn of the Bingiesser team. She finally took second place in the 4-dog class with her dogs Blueberry, Strawberry, Nanuk and Petterson. By the way, the well-being of the animals is in the foreground at the whole event and Mr. Bingiesser was of the opinion that the dogs are doing extremely well here on the Baltic Sea.

Just as I was about to walk back up the beach towards the dune, I saw Gerit Kling, the German actress and voice actress. It should be her turn soon, but she took a little time for a photo with me. And then she had to start. Visibly exhausted, she came back to the finish line and first had to catch her breath. In the interview afterwards, it became clear that such a lap is much more strenuous than it looks.

The highlight of the races on Saturday was a team with no less than 14 (!) dogs from a musher who probably had the longest journey from beautiful Switzerland. To everyone's surprise, Simone Thomalla went on board. The team shot off at insane speed and was back in no time at all – no wonder with a pulling force of more than 3 tons.

The Biike brennen on Saturday evening was the perfect event to end the day. This is originally a tradition from North Friesland, which takes place every year on February 21 in Schleswig-Holstein, but the big glowing fire also fits perfectly here on the Baltic Sea coast of the island of Usedom. 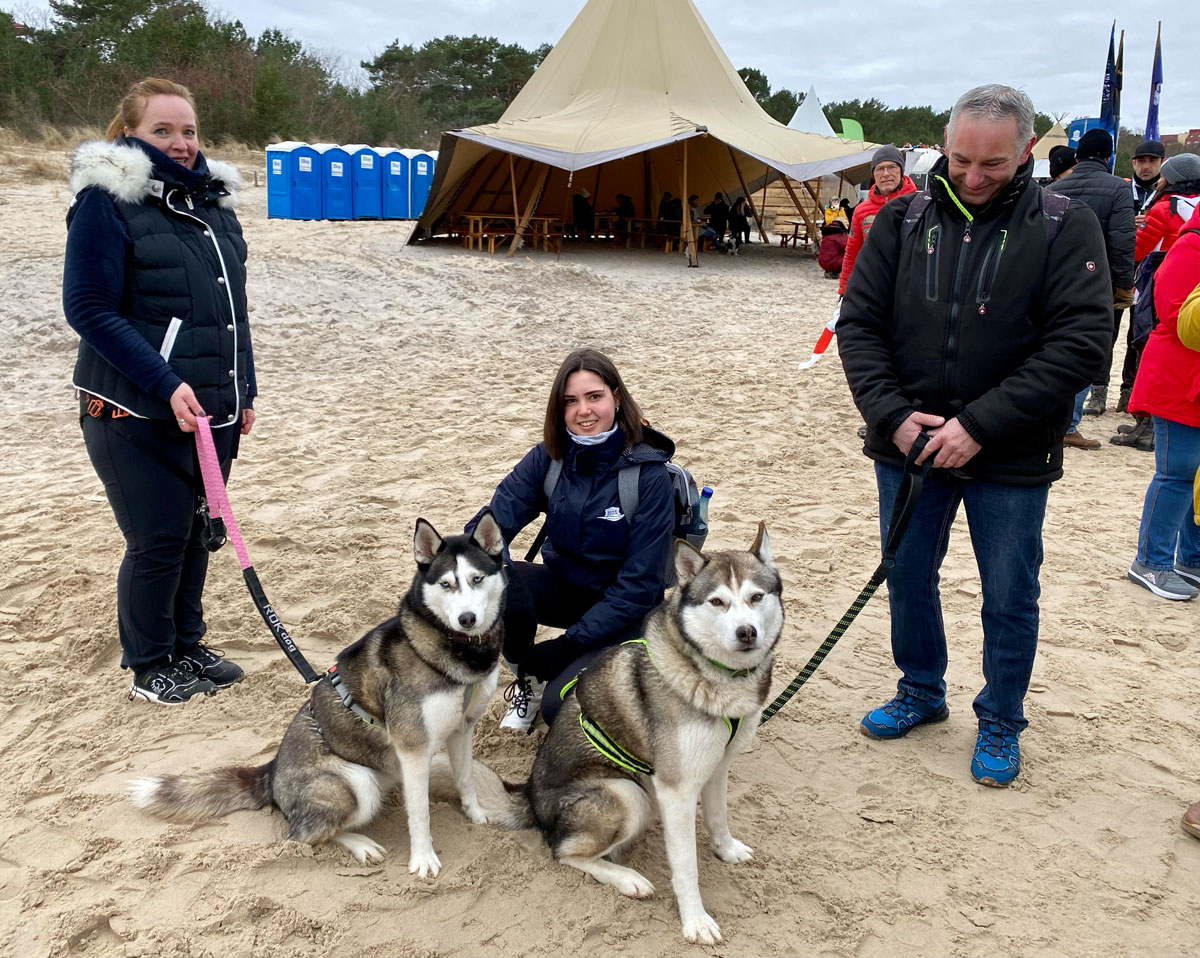 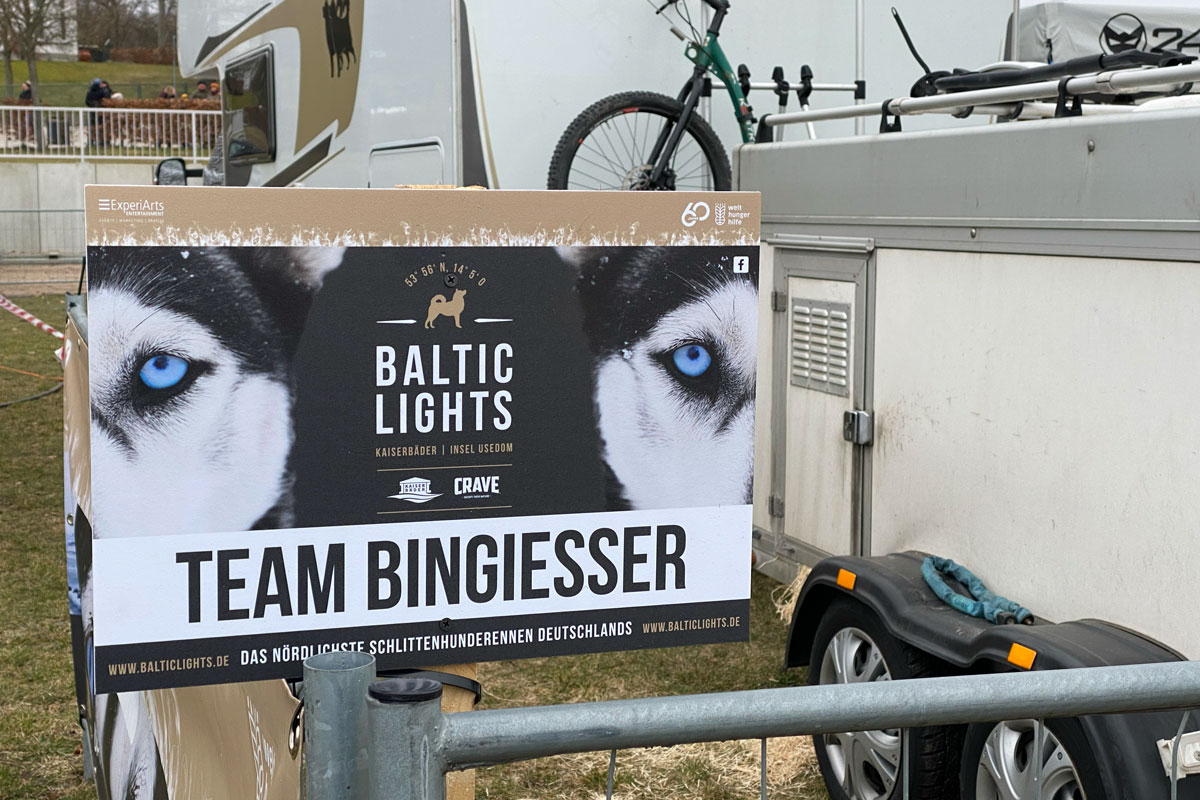 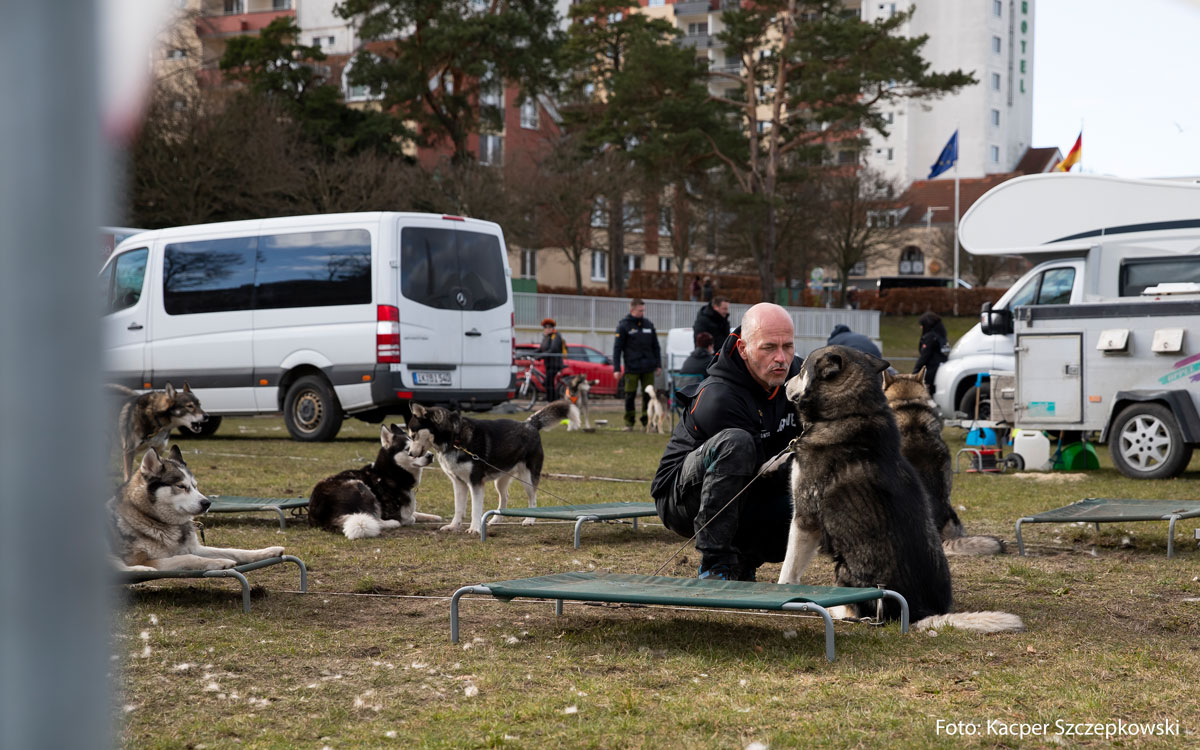 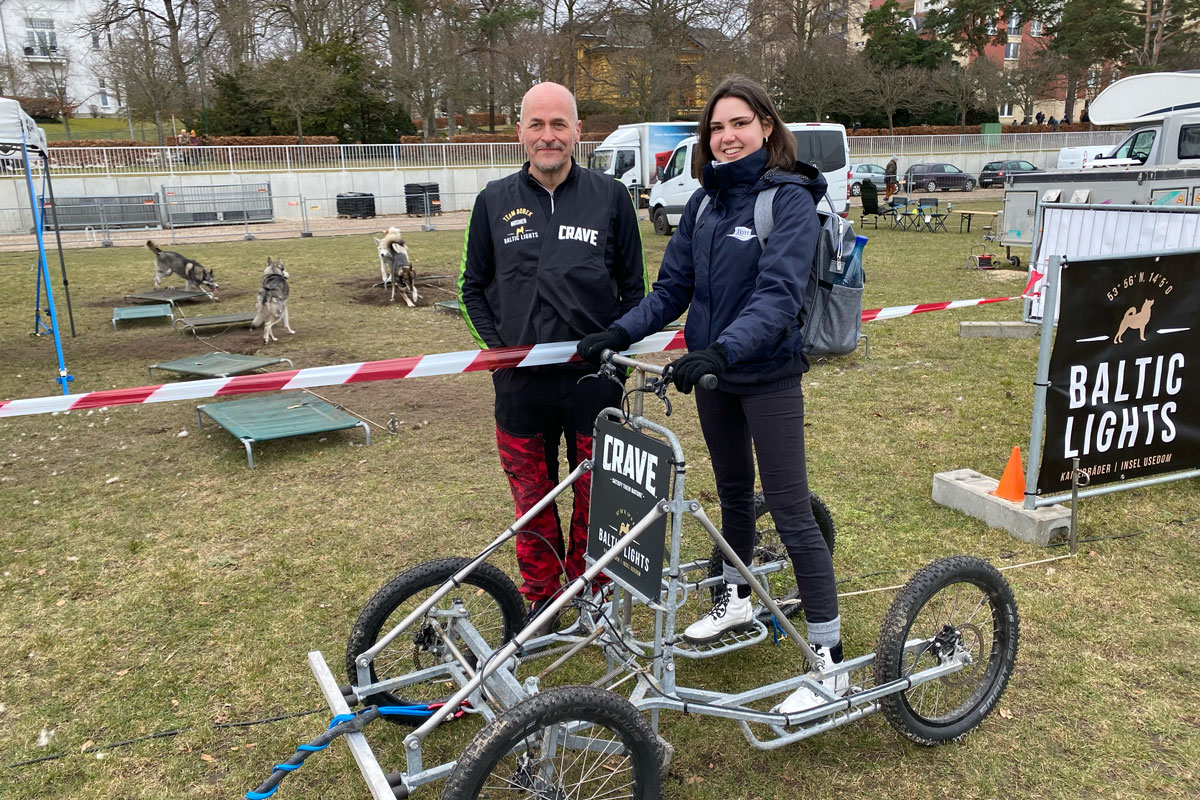 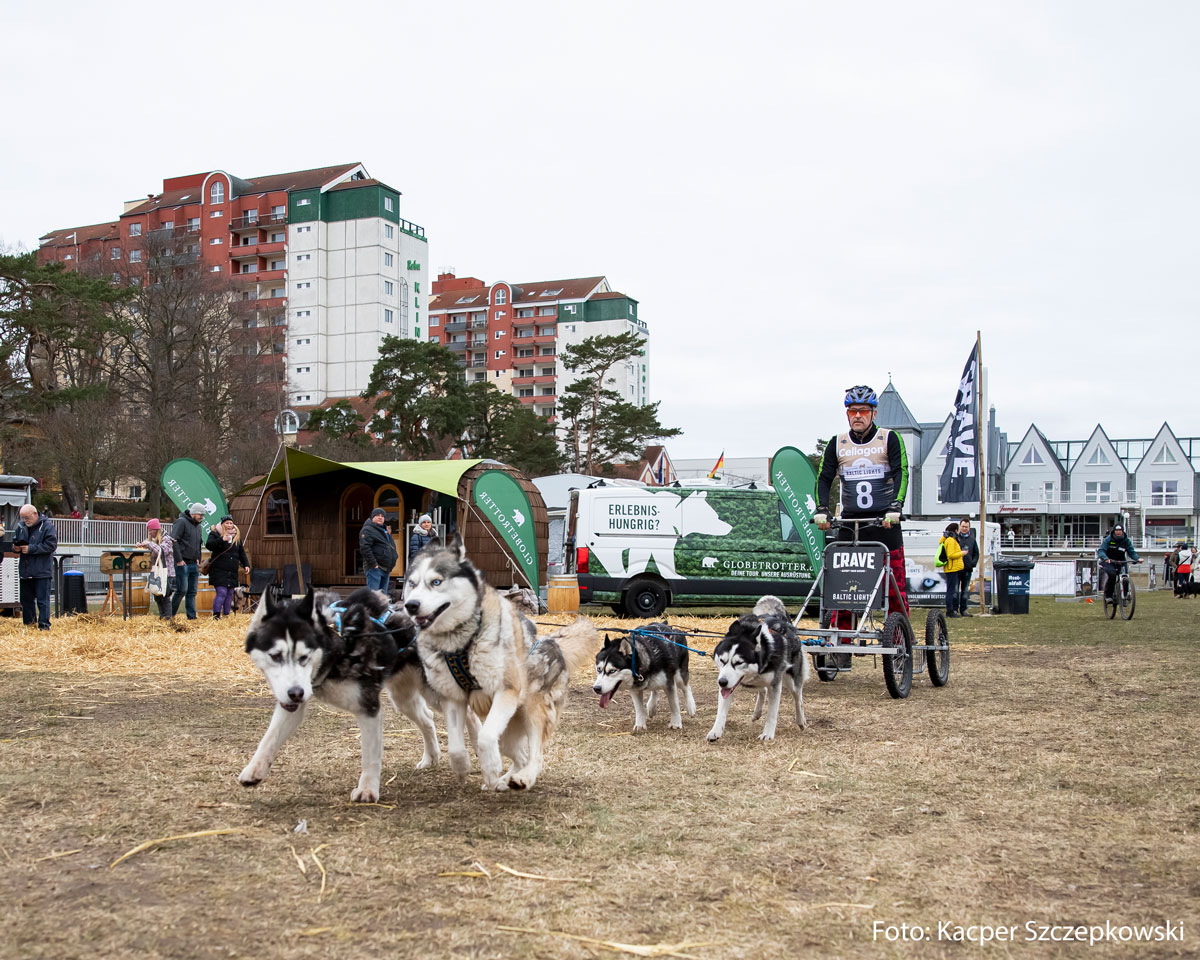 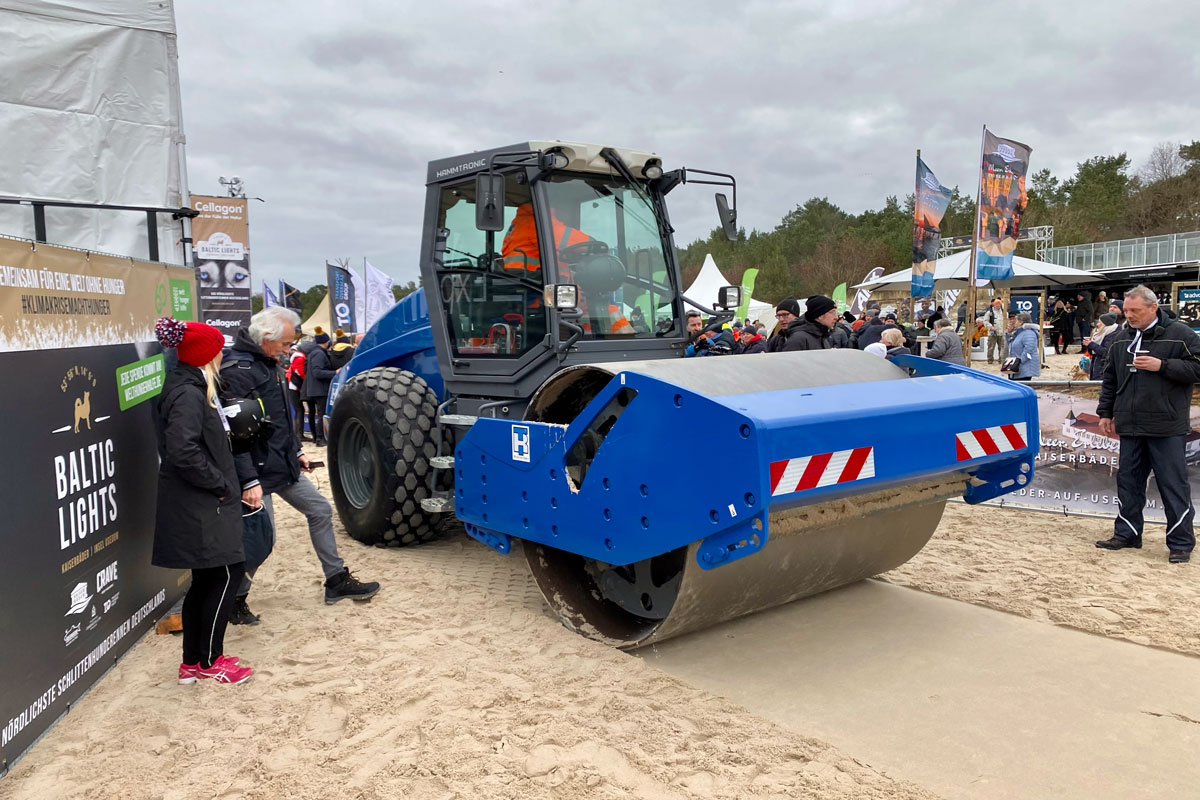 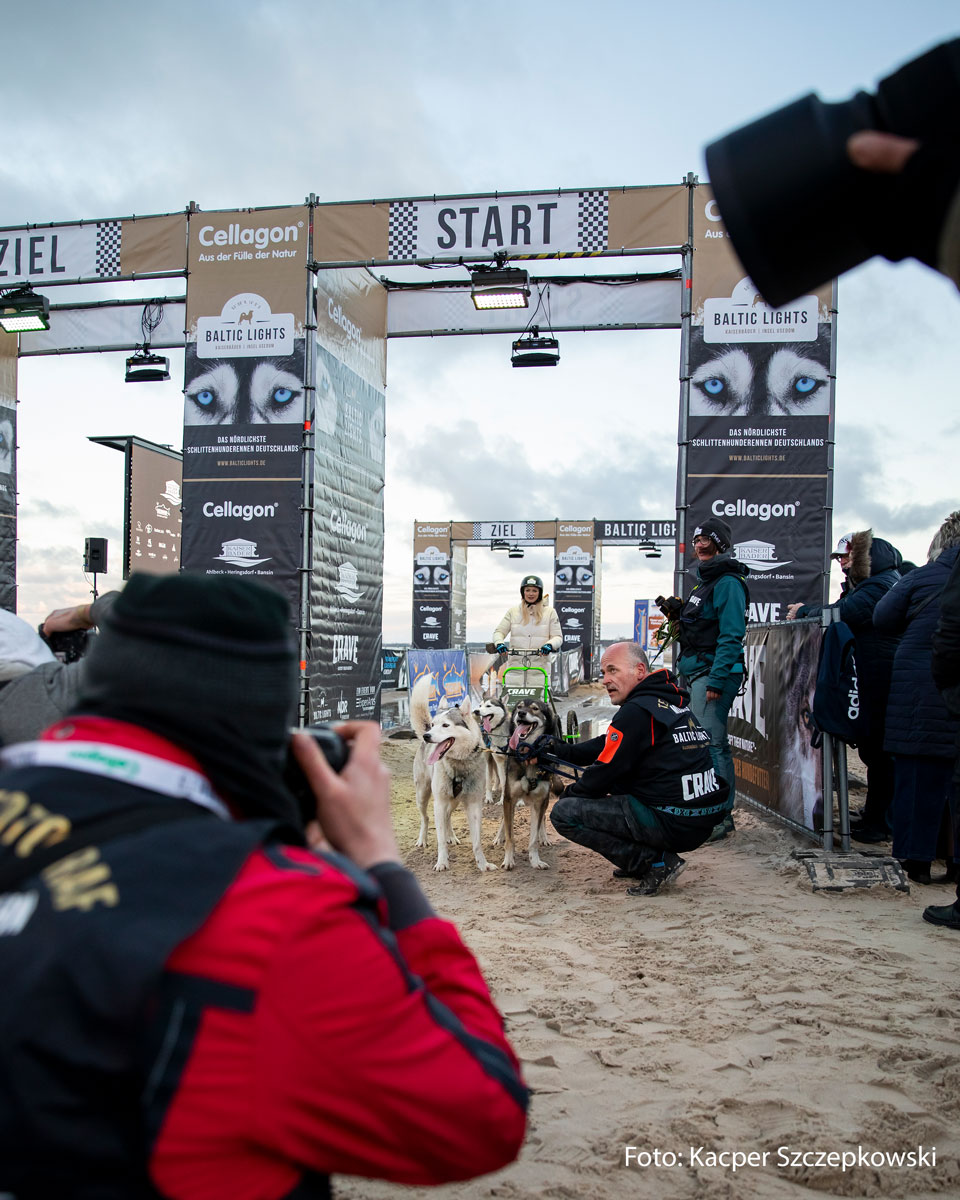 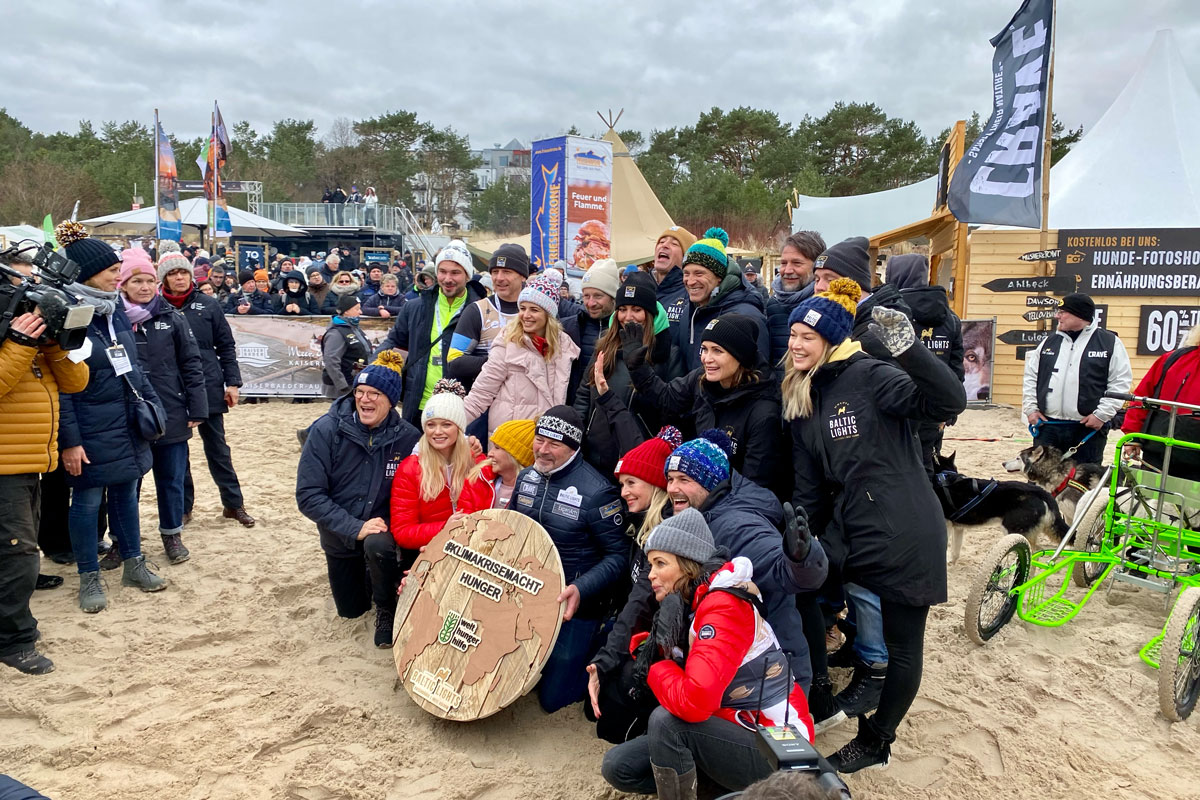 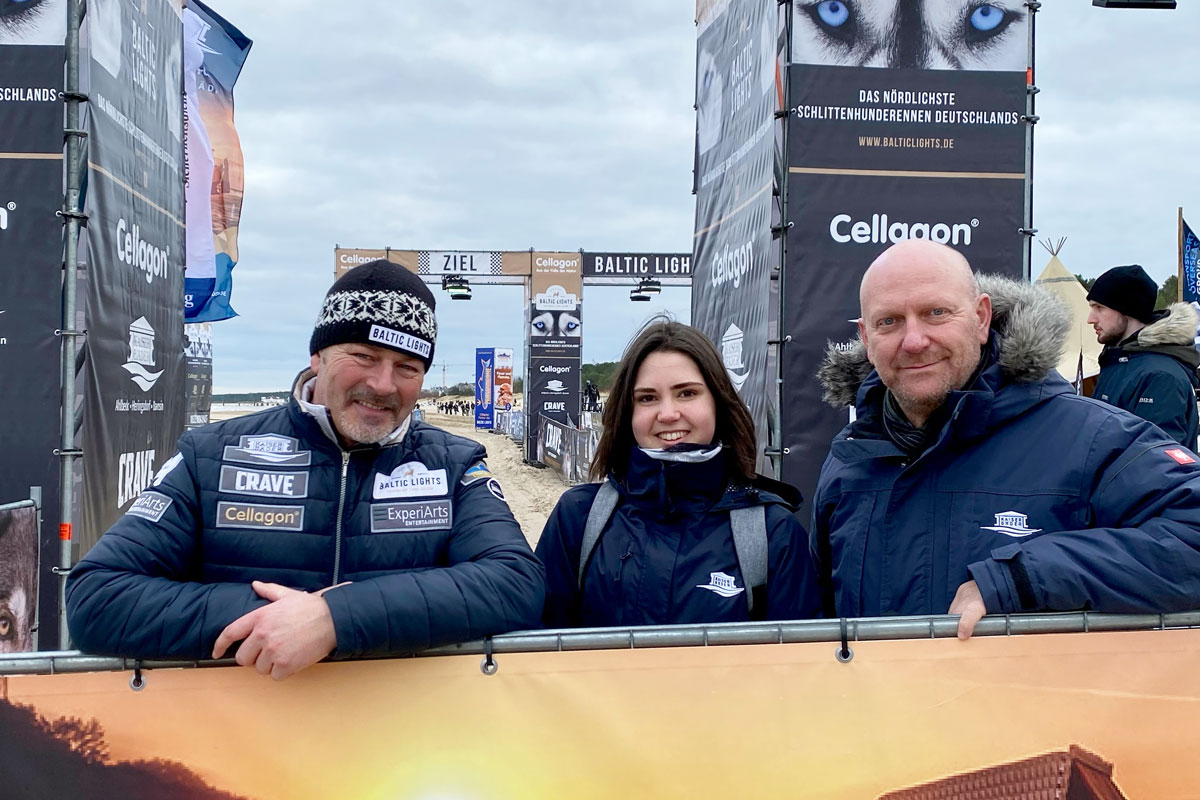 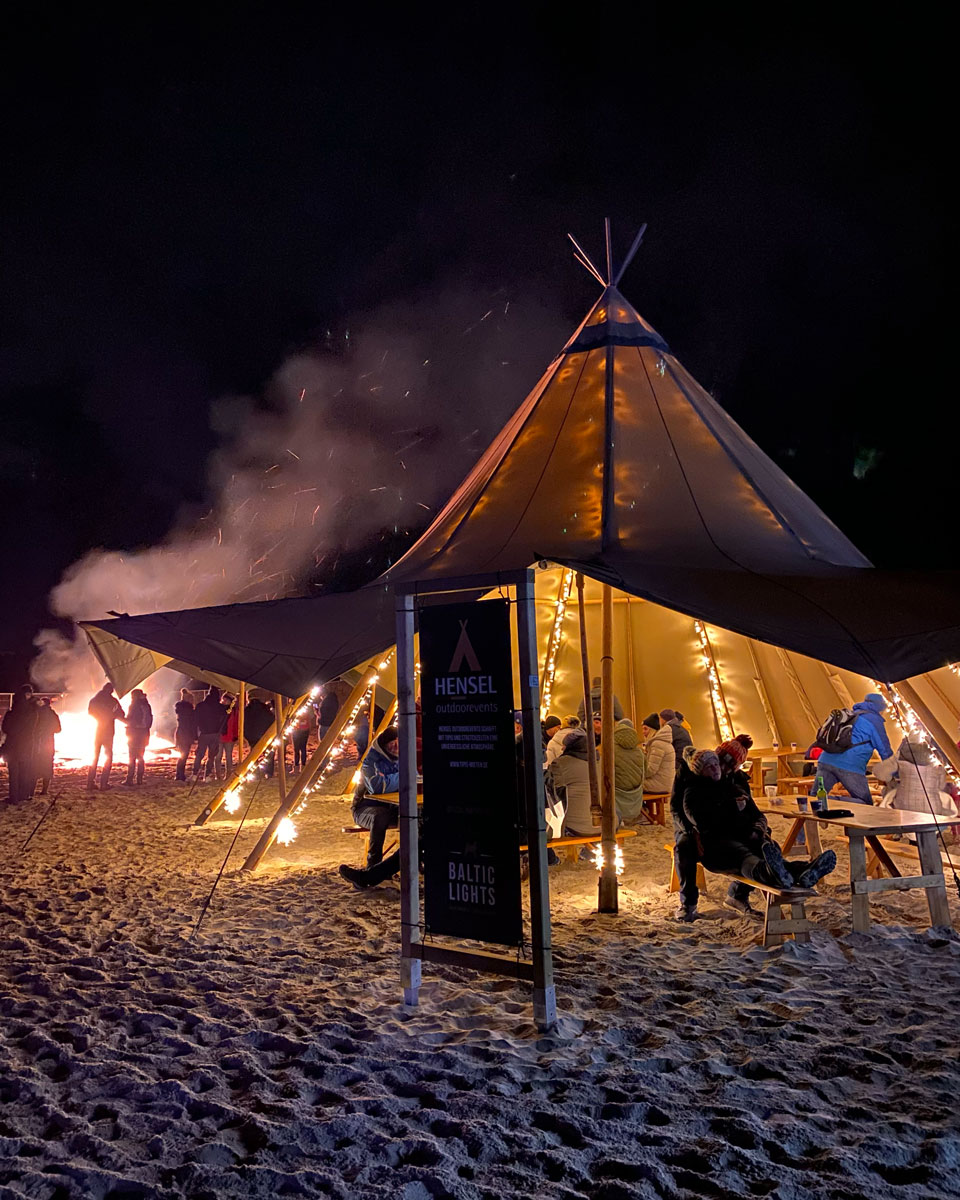 The final races with the mushers and the celebrities took place on the last day of the event. Despite yesterday's eventful day, everyone involved was full of energy and did their best once again. After the successful completion of the race, the winners were ceremoniously crowned. Well, you know who won? On Saturday we found out from the Bingiesser team that Franziska Knuppe did a very good job in training - and she was actually the women's winner. Team Bingiesser and their huskies really cleaned up there!

As the highlight of the day, Hendrik Duryn, who was voted the winner of the men's event, dressed up in historic swimwear by Jürgen Kraft. At a water temperature of four degrees, he fearlessly jumped into the Baltic Sea. Hats off! I would not have dared to go into the water in this icy weather.

In the end, donations totaling €45.000 were collected at the event, of which the company "Transport Overseas Group" alone sponsored €15.000. Wow what a success! EUR 15.000 of the total amount will benefit Ukraine this year due to current events.

Although Baltic Lights 2022 is a bit different and smaller than previous years due to the current circumstances - it was at least as beautiful. There was a real family atmosphere and after two years a bit of normality returned to the Usedom event sky.

My conclusion: The organizers Till Demtrøder, managing director of the company "ExperiArts Entertainment", and the spa director Thomas Heilmann, manager of the in-house operation of the imperial baths on the island of Usedom, can be proud of the course of this exclusive event!